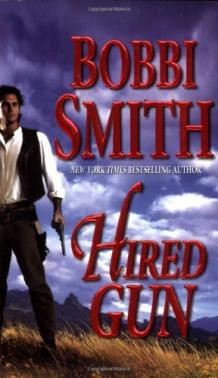 Trent Marshall is a hard man. Ever since his older brother was shot down in cold blood, he’s pursued justice with only his Colt .45 revolver to back him up. So when he agrees to go after a young girl abducted by the Apache, he knows he has tracking skills, years of experience, and iron determination on his side. What he doesn’t anticipate is having the victim’s older sister beside him every step of the way. Faith Ryan fires his blood like no other woman. As they penetrate deeper and deeper into the wilderness, Trent knows he cannot resist the primitive urge to make her his own, to take on a much more intimate role than…Hired Gun

"Bobbi Smith delivered yet another great read! Hired Gun Trent Marshall is hired by a family who's sister was abducted by Apache renegade's. Time is of the essence because she will be sold. This book keeps you well engaged in the journey to find Abbie before it's too late. Abbie's sister Faith heads out with Trent to help the search. This book has adventure's, love and a whole other scandal going on back at the family's ranch!" -Goodreads
Ebook | 336 pages | B001DIUQKW | October 31, 2006
Created with Pub Site
Created with Pub Site