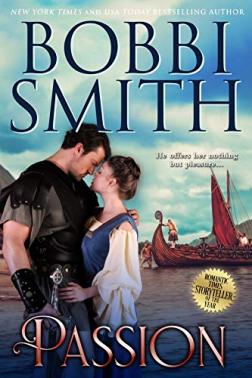 His Savage Embrace
Published by The Evan Marshall Agency
Buy from:

Unable to resist the desire running wild through their veins, Lady Dynna and the savage warrior from the north risk dishonor—and death—for their forbidden and dangerous love.

In this powerful tale from New York Times bestselling author Bobbi Smith, a woman and a man from worlds apart come together and make a bold escape for true passion.

To escape her forced marriage to the brute Prince Edmund, the young English Lady Dynna flees her father’s castle. From the hills of the Saxon coast she spies an approaching ship. Its blood-red sails can mean only one thing: a savage Viking attack.

On the ship is Brage, the magnificent Norse warrior they call Black Hawk, a savage man who battles for booty and takes captives. Yet on this day, Brage is betrayed, wounded and taken captive by his hated enemies the Saxons. On the misty shore, before he passes out, he beholds a woman of unsurpassed loveliness...

Tender-spirited Lady Dynna will secretly use her healing arts to save this savage man’s life. At first she does it out of duty. Such a beautiful man, so ill-treated. But as he recovers and awaits this kind beauty in his every waking moment, he feels something more. She feels it too…

It is just dusk when they hear the roar of the stream flowing fast and deep. Dynna had not thought the water would be running this high.

Brage studies the banks on either side, trying to pick the safest place to ford the stream. The current looks fast and dangerous. “Follow me.”

As she reaches for his hand, juggling her bundles of food and clothing, she slips and loses her footing.

Brage reacts instinctively, sweeping her up into his arms and clasping her to his chest. He stands there, unaware of anything save the precious weight of Dynna in his arms. He looks into her eyes and can see the longing there that matches his own, and he cannot stop—not this time.

“Are you all right?”

He bends his head to hers, his lips seeking and finding hers in his passionate claiming.